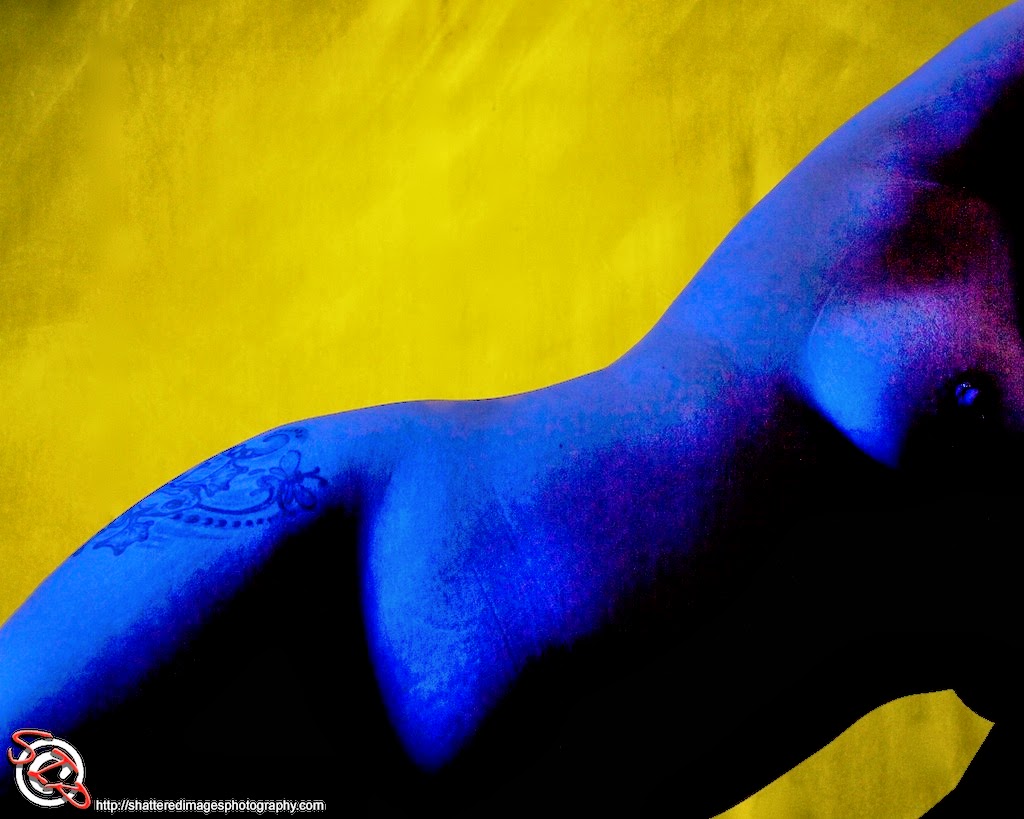 It is possible to use light as an element of creation in the production of a photo. Besides varying the position of the flashes or other lighting and their intensity, one can also change the color of the lighting so that the colors in the photo appear differently from how the subject appears to the eye without the lighting. To change the color of the lighting one uses lighting gels (also called colored gels). There are hundreds of lighting gels on the market each a different shade of a different color so that the lighting effects one can produce are endless. The aim is to produce a photo that is unlike what you can see with your eye. This particular photo was inspired by the artist Picasso's use of color, although you could take cues from any number of painters and artists.

For this setup I used three flash units with gels. You could experiment with using only two flash units, but the colors may not turn out as intense, and you run the risk of there being shadows where you do not want them. Of course there is nothing keeping you from using more flash units. By all means you should experiment with the lighting and the color of the gels to achieve what you wish to achieve with the photos. You will want an area where you can control the ambient lighting such as a studio as ambient light can affect the colors you wish to produce in the photograph. A way to dim the lights to just the point where you can see what you are doing is also desired. If you are not shooting in a studio, but say in a living room of a house, sunlight streaming in from a window can have dire effects on what you are trying to achieve with the colors as can light from street lights if you are shooting at night. If you do not have a studio available, you should try to find a windowless room in your home, or a room where you can put up heavy curtains to block out light. Use of a tripod as this will give more control if you are using a continuos light source. Camera movement could affect what you are wanting to achieve in undesired ways. A remote release is also advised to minimize camera movement. If you do not have a remote release you can use the camera's timer to keep movement to a minimum. Once you are setup, you will want to experiment with your camera settings to see what you can do.

This particular photo was taken with a Canon 7D with an EF-S 18-200mm lens set to 50mm. The ISO was set at 400 and the aperture was set at f8. The shutter speed was at 1/200th of a second while white balance was set to 5600k. It was saved in the RAW format. Three flash units were used. A pair of 430EX-IIs were used to light the background, one from camera left, and one from camera right. Both used yellow gels. The subject herself was lit by a single 580EX-II at a 90 degree angle with a blue gel. You can experiment with the colors of the gels to get the best color as not all gels are created equal. With hundreds of gels on the market there is no reason you should not be able to achieve your desired color in a photograph. You can also experiment with the position of the flash units and the type. Using different flash units in different positions you can achieve different effects. By all means experiment with your camera settings.

Lighting with lighting gels is an area where one can feel free to experiment, and it can be argued that you are not so much a photographer using lighting gels as you are an artist. After all you are not recording the image as it appears to the naked eye, but attempting to produce something the eye does not see, something that can only be captured in the instant of flash units and the "click" of a shutter. To get ideas I recommend looking at the artwork of famous painters such as Picasso in his Blue Period for inspiration. Painting your subject, background, or both with colored light opens up a world of creativity.

DeviantArt
Posted by Unknown at 6:43 PM No comments: